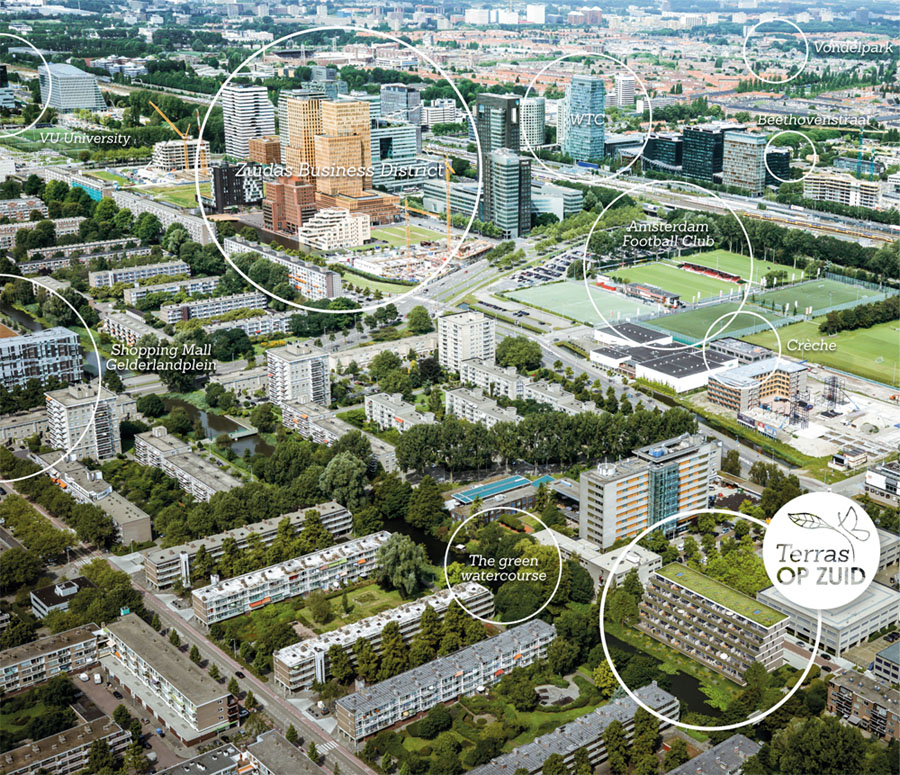 The Zuidas Business District is strategically located between the city centre of Amsterdam and Schiphol Amsterdam Airport, and the city’s Buitenveldert and Oud-Zuid areas. The Zuidas Business District is the Netherlands’ international brain and business port. The area owes much of its growing dynamism to the increasingly residential character of the area, bringing in excellent provisions and facilities, such as (international) schools, cafés and restaurants, shops and sports centres. Also on the increase are the events and exhibitions taking place in the Zuidas area.

The train (both from Amsterdam Zuid station and Amsterdam RAI station) will take you to Schiphol Amsterdam Airport in no more than 6 minutes. The Concertgebouw, one of Europe’s most prominent music halls, and the Museumplein (Museum Square) can be reached in less than 10 minutes by bike. Three nearby metro stations (Amstelveenseweg, Zuid and RAI) provide direct connections to various national railway stations. The nearby A10 ringroad offers excellent accessibility by car.

So far, around 650 dwellings have been realised at the Zuidas. By 2020, the number of dwellings will have increased to approximately 2500, while the Zuidas area is forecasted to be one of Amsterdam’s largest residential areas by 2040 with approximately 9,000 dwellings. Nearly half of the current population consists of residents aged 18 - 34, who in general are highly educated, while recent years have seen a rising number of families moving into the area.

Over recent years, an attractive and diverse range of shopping amenities has developed at Zuidas. There is an extensive shopping centre at a 5-minute walking distance at Gelderlandplein, while the diverse shops on Beethovenstraat, Scheldestraat and Maasstraat are within a stone’s throw of the Zuidas. Among the shops you will find on the Zuidas are the Simon Meijssen bakery shop, Hema, Rituals, Sissy Boy and various supermarkets.

The Zuidas today sports a broad variety of cafés, restaurants, coffee bars and lunch rooms, most of which are located around Zuidplein and Mahlerplein. The Zuidas is even home to some quite unique places, such as Restaurant As in the Beatrix Park, or the Strand Zuid City Beach, close to RAI.

Art and culture are also well provided for in the Zuidas area. The area accommodates various art galleries and boasts cultural events, such as the Canals Festival and Art Zuid. Residents will have fitness centres nearby, they can play football at the Amsterdam Football Club and the Buitenveldert Sports Club, while jogging fanatics can sweat it out in the Beatrix Park, the Amstel Park or along the green watercourse. And, last but not least, the area has amenities for tennis, horseriding and rowing. Once every year, thousands of runners participate in the Zuidas Run.